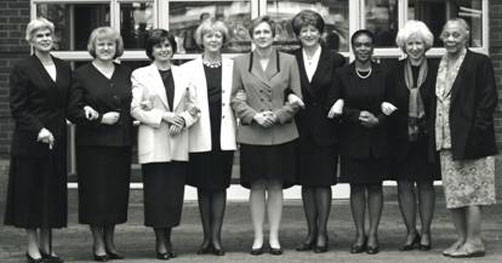 Throughout her life Vigdís has been a vocal advocate of democracy, equality and human rights both at home and abroad.

In 1997 Vigdís founded the Council of Women World Leaders at the John F. Kennedy School of Government at Harvard University along with Laura Liswood, who is secretary general of the council. Vigdís acted as chair of the organisation during its formative years. The Council is a network of current and former women prime ministers and presidents with the mission of mobilising women leaders globally for collective action on issues of critical importance to women and equality of the sexes. By increasing the number of women in positions of power and expanding their influence and drawing attention to their presence, it aims to promote good governance and strengthen democracy . The Council hosted a special meeting of women ministers of culture from around the world held in Reykjavík in 2005.

In the year 2000 Vigdís was appointed a United Nations Goodwill Ambassador in the Fight Against Racism and Xenophobia as part of the UN programme of millennium goals. Here Vigdís worked alongside Mary Robinson, former president of Ireland and UN High Commissioner for Human Rights, who directed the campaign during the year of the millennium.

Vigdís is a member of the Club de Madrid, which is an independent grouping of around 70 former presidents and prime ministers elected to their positions by democratic ballot. The aim of the organisation is to support and promote democratic institutions throughout the world by harnessing the strengths and expertise of its members. This work is carried out in collaboration with other organisations. Club de Madrid also provides counselling and support for national leaders and institutions dedicated to bringing about democratic change. It is the largest forum of former heads of state and government in the world.

The Oslo Center for Peace and Human Rights

Vigdís is head of the board of trustees of the Oslo Center for Peace and Human Rights set up in 2006 by Kjell Magne Bondevik, former prime minister of Norway. The aim of the Center is to promote peace, human rights, democracy and co-operation between people of different religions and cultures.

Vigdís sits on the Honor Committee of Fondation Chirac, a fund set up in memory of Jacques Chirac, former president of France, with the aim of promoting peace in Africa and improving general access to clean water, medical services and education. The fund awards annual prizes for conflict prevention and for culture in the service of peace in Africa.

Major milestones celebrated
After the presidency