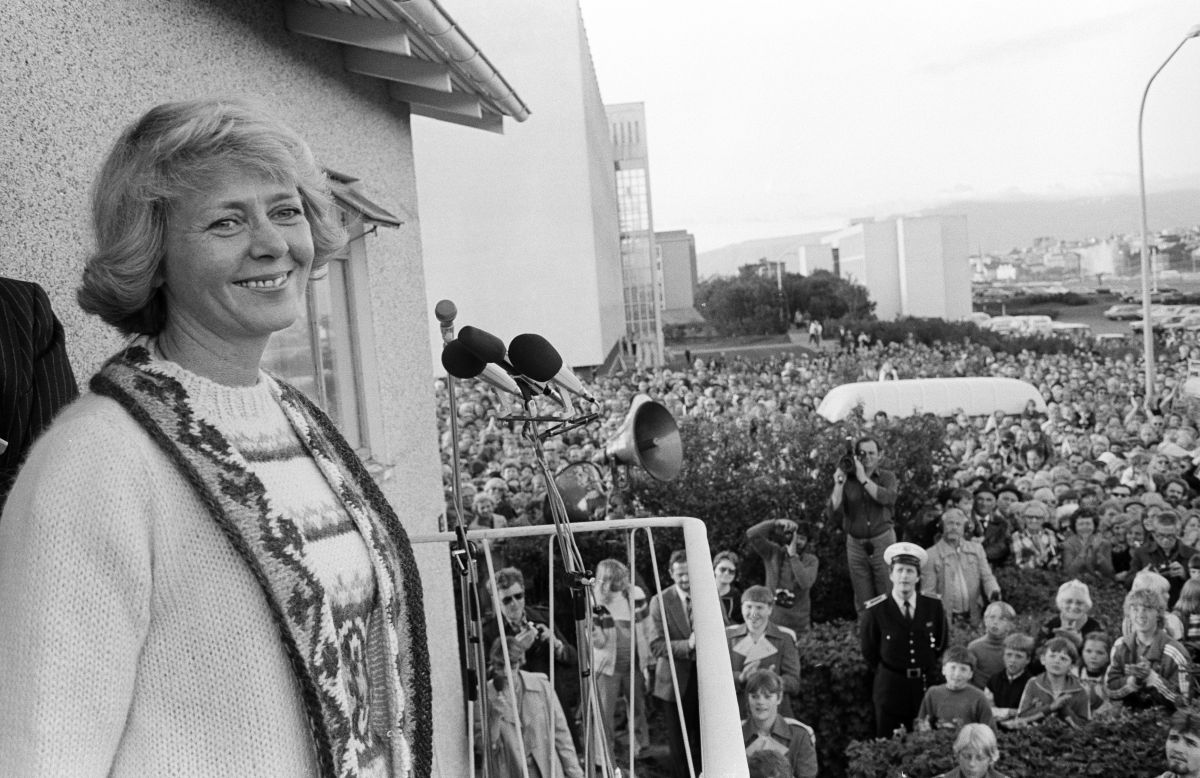 The presidential election was held on 29 June 1980 and generated a great deal of interest.

Many people took part in discussions, attended campaign meetings held by the candidates and aired their opinions in the newspapers. Polling stations closed at 11 o’clock in the evening with voter turnout registered at 90.5%. When final figures were announced at 6 o’clock the following morning, it became clear that Vigdís had been elected President of Iceland. She obtained a third of votes cast and it was not long until most of the nation supported her. The other three candidate called for the nation to unite in support for the new president.

As soon as the results of the election became official, an interview with Vigdís was broadcast on television and radio. A large crowd had gathered outside her home in Aragata to welcome her by the time she returned home at around 7 o’clock in the morning. Vigdís was wearing a handknitted dress that she had been presented with during the election campaign and that she had promised to wear only when victory had been won.

The results of the presidential elections of 29 June 1980 were as follows:

Vigdís has often said that she welcomed the fact that the election results were so close since it showed that there had been a true fight for the presidency. The following letter was sent by a farmer’s wife in Northern Iceland to Svanhildur Halldórsdóttir, Vigdís’s campaign manager, on 1 July 1980: “I am writing these few lines to express my happiness on Vigdís’s election victory. It makes me view the future more positively, the fact that so many people voted for her, this brave and honest woman, the image of what should characterise every Icelander. And in my countrywoman’s eyes, Vigdís is charmingly Icelandic.” She included with her letter this poem by Valborg Bentsdóttir, saying that the sound of Vigdís speaking had reminded her of it.

Man shall be valued
The dream is a man’s worth.
No-one asking for charity.
Echoing in the peaks and on earth.
Freedom shall reign on earth
Equality, progress, peace.

According to Svanhildur Halldórsdóttir, there is no doubt that attitudes to women changed after Vigdís was elected and that women felt more self-confident. “She proved that we have what it takes to be leaders, it is not the prerogative of men. She proved that women are not inferior to men, something that we, her supporters, already knew. She stressed our roots – our cultural heritage – and led us out to the fields. Brought the position of President closer to the people and treated everyone as equals – women, men and children. She was a good spokesman for our nation in Iceland and abroad. Vigdís lived up to the expectations of those who supported her at this time and won over those who did not support her at the outset but who changed their tune later on. Today nobody is surprised if a woman applies for a top position – and I don’t think many people let someone’s family situation affect their opinion of people applying for positions of responsibility. That’s what has changed.

Vigdís herself has said that progress in matters of equality is proof that, as long as people are willing, an enormous amount can be done in a short period of time.

People speculated and commented on Vigdís’s gender throughout the election campaign and continued during the first years of her presidency. The eyes of the world turned to the saga island in the north and Icelanders sensed that a new leaf had been turned and that they had taken part in a world-changing event.

The election of Vigdís Finnbogadóttur as President of Iceland on 29 June 1980 attracted the attention of the world, understandably since she was the first woman to be democratically elected head of state. This historical event and Vigdís’s successful term of office drew attention to Iceland, the Icelandic people and Icelandic culture.