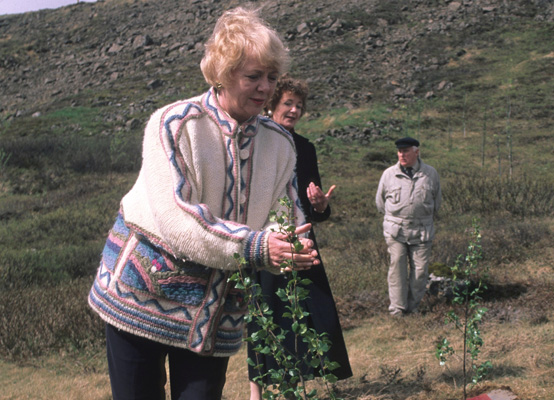 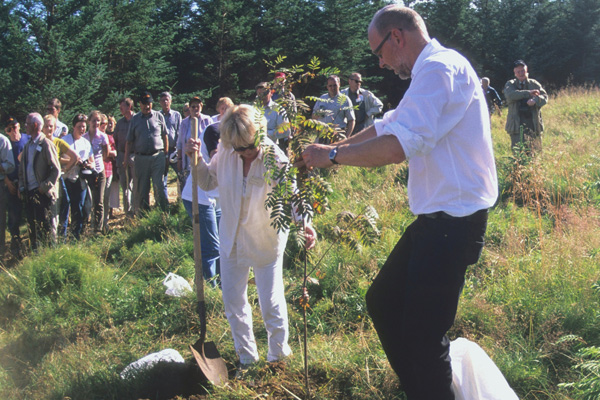 Land reclamation and soil improvement, afforestation and environmental protection are matters close to Vigdís’s heart and over the years she has given these issues invaluable support. She has focussed attention on the pedagogic value of teaching children to nurture and protect nature, believing that this way the youth of Iceland will acquire respect for the country and feel responsible in how they treat it. As president Vigdís placed a special emphasis on revegetating barren areas and planting trees. She has compared gardening and agriculture to bringing up children and said that nurture of the land is closely related to nurture of mankind.

In 1990 the Icelandic Forestry Association established a tree plantation called Vinaskógur – ‘Wood of Friends’ – on land at Kárastaðir near Thingvellir in Vigdís’s honour and for her pleasure. The wood is envisaged as a memorial to the importance of peace and friendship among peoples. A succession of internationally famous visitors have paid visits and planted trees, among them many heads of state and representatives of foreign countries and international institutions.

Vigdís is the patron of Landvernd, the Icelandic Environment Association. In June 2005 the association’s directors gathered at Alviðra by the river Ölfusá in southern Iceland and marked Vigdís’s 75th birthday by planting 75 birch trees to form a grove now known as Vigdísarrjóður. The grove is intended to offer shelter for future children who come to Landvernd environmental centre at Alviðra for camping and educational activities.

Yrkja is land revegetation and horticultural fund for children and young people set up on Vigdís’s 60th birthday in 1990. The initial capital came partly from the sales of a book called Yrkja, published to mark the occasion, with Vigdís appearing as a character called Greenstockings. The fund provides children at elementary school level with the money to buy trees and create small plantations. The idea is that the children follow their trees as they grow and from this develop an awareness of the value of nature. The first chairman of the fund was the poet Matthías Johannessen, succeeded by another poet, Sigurður Pálsson.

Words and plants mean a lot to Vigdís.