State and official visits to countries outside Iceland

1981   Finland, planned visit cancelled due to the sickness of the Finnish President Kekkonen

1994   Queen Beatrix and Prince Claus of the Netherlands

1995   Martti Ahtisaari, president of Finland, and his wife Eeva 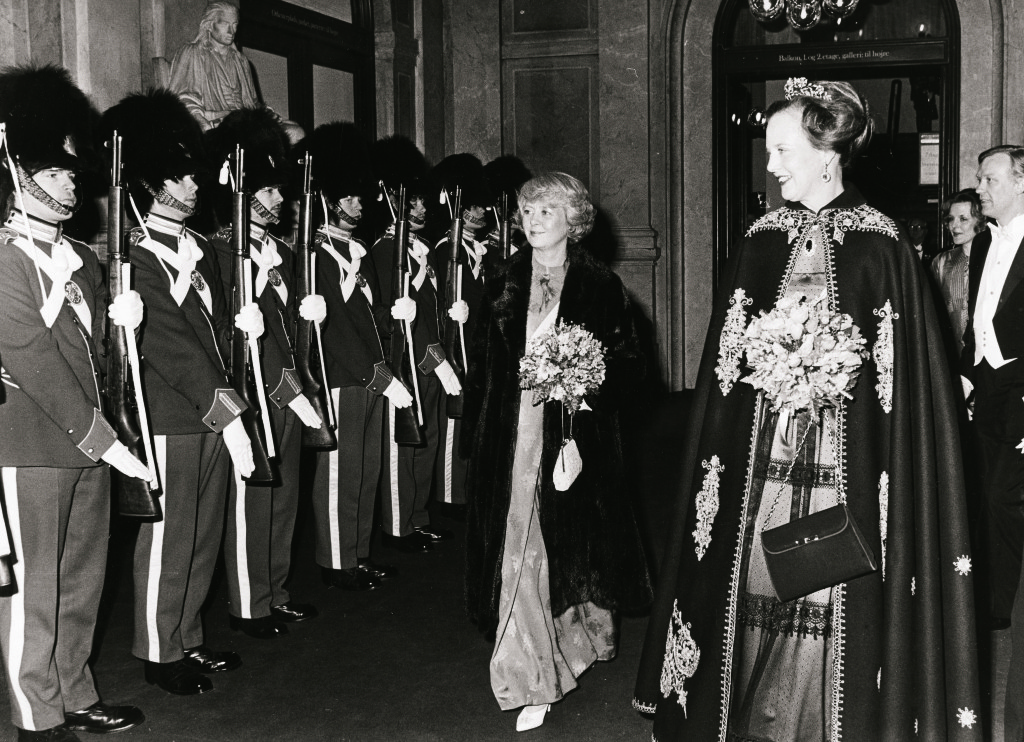 Vigdís made her first state visit to Denmark in February 1981. The visit attracted wide interest in the Copenhagen media, not least because it involved the meeting of two female heads of state. One particularly memorable occasion was a luncheon arranged for Vigdís and Queen Margrethe of Denmark by the Danish Union of Journalists which ended with a press conference at which the two heads of state faced 400 journalists and newsmen. This appears to have been the first time the queen had accepted an invitation to attend a press conference organised from outside the royal palace.

The media noted the rapport that had built up between the two women and remarked on Vigdís’s warmth and accessibility. When asked at the end of the meeting what headline they would like to see in the newspapers the next day, Vigdís came back immediately with, “The final victory for science: no nuclear weapons.”

In connection with Vigdís’s state visit to Denmark the Danish entrepreneur Peter Brøste set up a prize called the Optimist Prize (Optimistprisen), to be awarded annually to young Icelandic artists, with the president of Iceland as its patron. To quote Brøste: “Her first official visit was to the old country, Denmark, where she appeared in interview on Danish television side by side with Queen Margrethe. I have to say that I was very much taken by the president of Iceland. She was beautiful, strong and straightforward, radiating an aura of so much optimism. She encouraged optimism and co-operation among small nations and this I found inspiring.” When Vigdís stood down as president Brøste asked her to take a seat on the Optimist Prize judges panel.

A month after the visit to Denmark Vigdís welcomed the Canadian prime minister Pierre Trudeau to Bessastaðir and in autumn 1981 visited Norway, Sweden and Finland. During her time in office Vigdís made official visits to many European countries, as well as to Canada and China.

In November 1990 Vigdís represented Iceland at the coronation of Emperor Akihito of Japan. Her visit provided the occasion for a major publicity campaign about Iceland organised by parties from both Iceland and Japan and intended to promote a more rounded image of the country in Japan. The Japanese had shown great interest in the Reagan/Gorbachev summit at Höfði in Reykjavík and a property developer by the name of Sato who owned an international chain of golf courses came up with the idea of raising a replica of Höfði on his course in Japan. Vigdís attended the opening ceremony and cut the ribbon. The complex included a church next door, with the Japanese Höfði intended as a hotel for honeymoon couples – the idea being that marriage and peace should go hand in hand. At the same time an office of the seafood marketing company Icelandic Group (SH) was opened in Tokyo at a formal ceremony in the presence of the president of Icelandic. A further outcome of the visit was the founding of the Japan-Iceland Society in Tokyo.

Vigdís had in fact been to Japan before, in 1987, to attend the opening of the exhibition Scandinavia Today. On that occasion she met Emperor Hirohito for talks at the Imperial Palace in Tokyo, being the last head of state to meet with him before his death in 1989. Vigdís attended his funeral together with 150 other heads of state.

Vigdís made a state visit to China late in August 1995 accompanied by the foreign minister and a delegation of representatives from Icelandic business and industry. The visit coincided with the fourth UN World Conference on Women held in Beijing, at which Vigdís delivered the opening address. She thanked the United Nations for its recognition of the universal nature of the human rights of women, declared that peace and equality of the sexes were interlinked concepts, and hoped that the conference would make a lasting contributing to world peace. Iceland had opened its embassy in Beijing only half a year earlier and the presidential visit played a significant part in smoothing the way for increased trade and business relations between the two countries.

After the presidency
International Relations