President of the Republic of Iceland 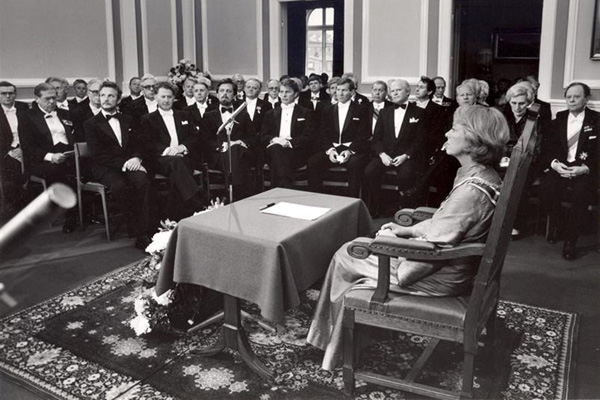 In her inaugural address on 1 August 1980, Vigdís said:

“My sincere wish above all, now and in the future, is that the democratic values of the nation evident during these elections and in our constitution as a whole will benefit our country and all its inhabitants, both in our dealings with each other and with other nations.” (Inaugural address 1980)

Many people wanted to meet and talk to the first female president in the world elected in a national election. Her popularity and the respect in which she was held increased due to the fact that she spoke several languages and was well acquainted with the history and culture of many countries. She was applauded for her proficiency in the Scandinavian languages as well as French, English and German. At the beginning of her second term of office, Vigdís said:

“When I took office here four years ago, I think there were only a handful of people who fully realised that Icelanders had written a new chapter in history by being the first to choose a woman as their president in a general election. The past four years that I have been in office have been deeply influenced by the attention given to this by other nations. Media innovations mean that news speeds across the world – sometimes even news that is hardly newsworthy – and this created curiosity about Iceland and the Icelandic people, who were regarded as somewhat audacious. An increasing number of countries wanted to know more about the island in the North and to establish links of friendship.”

On the 25th anniversary of her election, Vigdís said that she had been surrounded by good men in tailcoats at her inauguration and that she had hardly seen any women in the group apart from Halldóra Eldjárn. She said that later on she realised how extraordinary it was that Iceland had elected a female president: “It doesn’t matter where I am in the world. People always mention it. The election drew a lot of attention to Iceland and Icelanders” (Vigdís Finnbogadóttir, interview, January 2009).

During her presidency, Vigdís often commented on the position of women in society. At the end of the United Nations Decade for Women in 1985, she said that it was a long way from Iceland to heaven. Despite some progress having been made, victory was still a long way off.

Vigdís was a popular and respected president. She was considered a very capable head of state and won unanimous praise for her behaviour in the wake of the1995 avalanches in Flateyri and Súdavík. Vigdís attended a special memorial service for those who died in the avalanches and showed great compassion and warmth to the families of those who perished and to all inhabitants of the West Fjords. “People took comfort in a hug, and fishermen weren’t shy about crying on my shoulder” (Vigdís Finnbogadóttir, interview, January 2009). She recalled the events in her New Year address in 1995:

“When we look back over the year which has just ended, we experience a deep sense of mourning. This was a year of terriblel natural disasters, a year of great tragedy for individuals, whole regions, and for the whole nation. When dreadful things happen, such as the events in Súðavík and Flateyri, we are made to feel our own helplessness more keenly, but at the same time our hearts are filled with compassion for all those who have suffered such a heavy loss, both there and elsewhere in our country.”